“…For by my side you put on
many wreaths of roses
and garlands of flowers
around your soft neck.

And with precious and royal perfume
you anointed yourself.

On soft beds you satisfied your passion”. 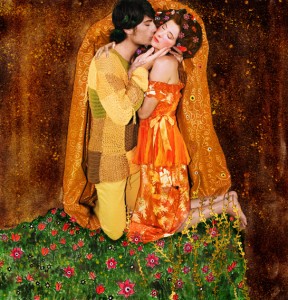 The sense of smell is at once the most easily overlooked sense and at the same time perhaps the most evocative.  It is not unusual for most people to pass the entire day without any conscious awareness of smell (excepting flavor, which is actually dominated by smell).  However, smells that do reach our awareness can evoke strong reactions – from disgust at the rotting garbage at the curb, to delight and craving at the smell of fresh baked pastries. Proust famously experienced a detailed reminiscence of his aunt’s home upon smelling a tea –soaked madeleine cake, described in many pages of detail in his Remembrance of Things Past (1913). How can a sensory system shift from near non-existence to domination of our emotions and thoughts?  How can inhalation lead to exaltation or disgust?

The answer may lie in anatomy.  All organisms, from bacteria to humans, have a sense of smell – an ability to detect the chemical environment in which it lives.  The olfactory system is remarkably conserved across the animal kingdom, with very clear parallels between the neural structures underlying smell in insects, fish, reptiles, birds and mammals.  In fact, your olfactory system looks remarkably similar to that of a lizards.  The same cannot be said of your other sensory systems.  Thus, the olfactory system appears to have, very early on, evolved to solve specific problems and has basically kept with that solution since.

What are the problems the olfactory system has to solve?  A very basic one is “what is out there?” Mate? Food? Predator? Home? There are at least two ways to solve that problem from a chemical point of view.  One is to have a dedicated receptor and labeled-line for each possible chemical.  Thus, there could be a receptor A for predator odor which is connected to circuits driving avoidance or escape behaviors.  There could be a receptor B for mate odors connected to circuits driving approach and mating behaviors, etc.  There are examples of such hard-wired olfactory circuits in many species.  However, this process is very limiting. First, most odors in nature are not single molecules but complex mixtures of often hundreds of different molecular species. Second, what if I disperse into a new environment with new foods and new predators?  What if my mate wears perfume? 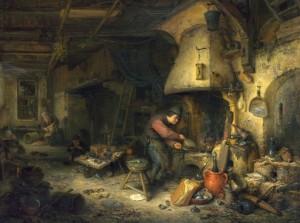 An alchemist by Adriaen van Ostade

Thus, it appears that very early in evolution, olfactory systems added a learning component.  This process involves receptors that recognize ‘features’ of odors (e.g., molecular features such as hydrocarbon chains or functional groups) and a combinatorial process of merging those features into objects (e.g., orange or rose or tiger).  Importantly, the combinatorial processes includes a mechanism that remembers past combinations which enhances recognition and discrimination the next time the smell is experienced.  This combinatorial process shifts smell from an alphabet of possible odors in the labeled line scheme to an entire dictionary of odor objects, each using a unique combination of the basic alphabet of receptor activation.  Given that humans have about 400 different olfactory receptors (mice have around 1000 and fruit flies have around 40), our potential odor palate is nearly limitless.