Home » Notícias » Our Epigenetic Minds – The Brain Beyond Darwin, by Edward Ziff

Our Epigenetic Minds – The Brain Beyond Darwin, by Edward Ziff 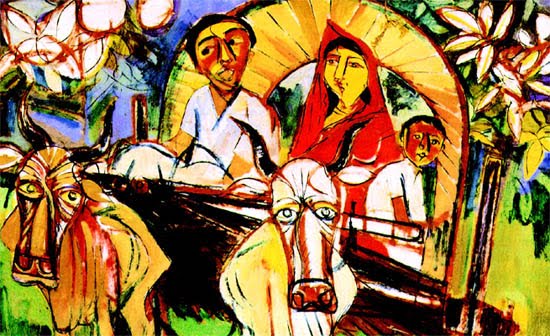 We readily accept the idea that brain activity associated with our experiences – hearing, seeing, touching, and tasting – can alter the configuration of brain circuits and change the function of the brain. These changes form our memories, conscious memories and probably others not conscious yet still exerting profound effects on our lives, like the forms of memory that enable us to drive a car or to react to fearful circumstances. Brain circuits can be changed by altering the strengths of synapses, the connections between neurons that enable one neuron to regulate the activity of its synaptically connected neighbor. This process is called synaptic plasticity. However, other unexpected mechanisms based on DNA can also reorganize brain function, and can act surprisingly quickly.

Two theories, Darwin’s Theory of Natural Selection and the Central Dogma, have dominated our thinking about evolution and genes for the last 50 years. The Theory of Natural Selection holds that variants arise in the population through random mutation, and that these variants are the substrate for selective pressures that enable new life forms to emerge. The Central Dogma holds that the basic unit of genetics is the gene. The combination of these two theories, which is called the New Synthesis, holds that changes in genes that arise through mutations, most commonly single base mutations, are the sources of the variation upon which natural selection operates. This view is very much centered on the primacy of the gene. Gene primacy is expressed in the famous maxim of Beadle and Tatum, “one gene, one enzyme”. The gene-centric view has led to searches for individual genes that cause diseases, the notion that individual genes can be selfish, and even the proposal that individual genes can account for specialized human traits such as language.

Evolution by the mechanism of the New Synthesis can operate advantageously when environmental pressures are low or increase gradually. These circumstances arise when the environment is stable.  In this case, evolution takes place through competition between individuals. In this context, the New Synthesis mechanism of evolution, which is also called gradualism, is satisfactory. 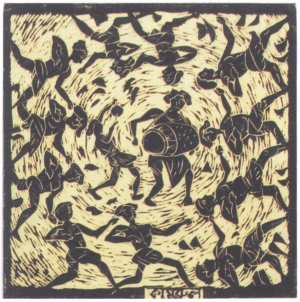 However the environmental pressures are not always low, and in some cases can be strong and can increase rapidly. If the environment is rapidly changing, gradualism may evolve new life forms too slowly to ensure effective competition. Of course, changes in the natural environment, such a climatic changes, can create new selective pressures. However, one novel example of a rapidly changing selective pressure is societal pressures that are exerted through the rapid pace of human social and cultural evolution. As humans evolved from societies of hunting and gathering to agricultural ones, and then to urban societies, the demands upon the brain and nervous system increased immeasurably. Brain evolution through gradualism, which takes place gene by gene and is not directed towards acquisition of function, may well have been inadequate to meet this challenge.

An alternative mechanism for evolution, the Lamarckian mechanism, holds that characteristics acquired from the environment can contribute to inheritable changes and hence to evolution. The Lamarckian mechanism was discounted on the basis of the Central Dogma and our modern understanding of how genes function. Weismann posed the major criticism of Lamarckian theory. Weismann’s dogma stated that gametes and somatic cells are separate. Therefore the somatic cells cannot influence the gametes. Without such an influence, the characteristics acquired by the soma cannot be transferred to the gametes and hence cannot be inherited.

New evidence however has opened a window within which Lamarckian evolution can operate. This window arises from our modern understanding of epigenetics and mechanisms of human development. The science of epigenetics holds that heritable changes in gene function and expression can arise without the occurrence of mutations of the sort that fuel Darwinian evolution. Barbara McClintock was one of the first to demonstrate changes in the genome occur that do not involve changes in the structure of the genes themselves.

Epigenetic changes involve the placement of small modifications of DNA base structure called marks, which alter DNA function without changing the DNA base sequence. Epigenetic marks can also involve chemical modifications of the histone proteins that package DNA. These marks do not alter the structure of the protein that is encoded by a gene. Instead they alter the level of expression or the circumstances under which the gene is expressed. Thus they do not suffer the limitation of Darwinian evolution imposed by its reliance on random mutation, which is that most mutations are deleterious. Also epigenetic mechanisms can affect the expression of many genes of an organism in a single generation, unlike Darwinian evolution in which genes alter one at a time. Epigenetics therefore provides a new view of the gene. The gene is not the primary unit of genetics; instead it is but one component of a larger system that controls organism function.

Because the genome was always regarded as relatively stable and only capable of change over Darwinian time, alterations in the genome were unlikely candidates for mechanisms that changed neuron functionally in response to our experiences. Because Epigenetics bypasses the need for changing DNA’s base sequence structure it can work quickly. Also, unlike Darwinian changes, epigenetic changes can ready be reversed. 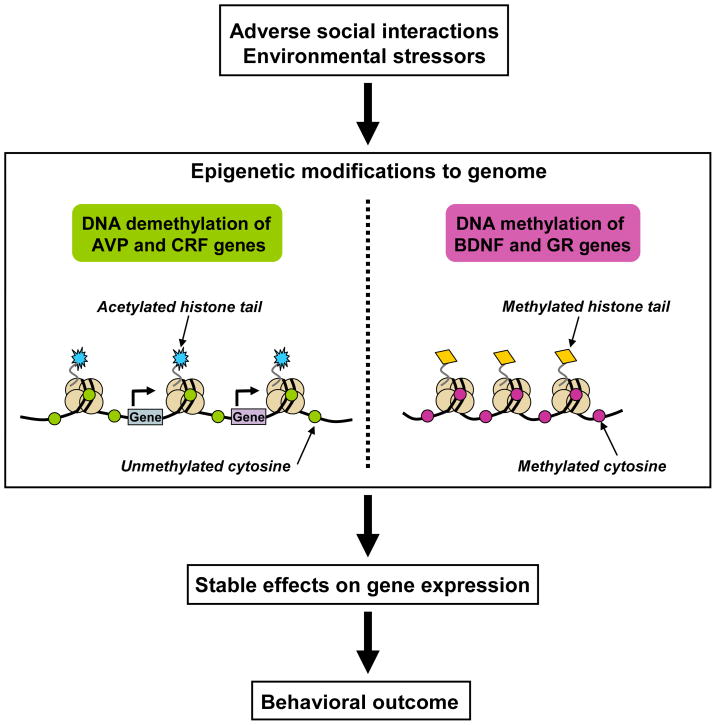 Chromatin remodeling and its proposed role in governing the neurobiological consequences of early-life adverse experiences. Recent evidence indicates that adverse social interactions and stressful experiences early in development epigenetically mark genes in the CNS. Documented epigenetic changes include experience-driven DNA demethylation of the arginine vasopressin (AVP) and corticotropin-releasing factor (CRF) genes, and DNA methylation of the brain-derived neurotrophic factor (BDNF) and glucocorticoid receptor (GR) genes. These changes, along with those presumably occurring at histones, produce a unique epigenetic signature in the CNS that regulates transcription of the genome and influences behavioral output.
Extracted from: Roth TL, Sweatt. Epigenetic marking of the BDNF gene by early-life adverse experiences.Horm Behav. 2011 Mar;59(3):315-20. Epub 2010 May 17.
http://www.ncbi.nlm.nih.gov/pmc/articles/PMC2948595/figure/F2

DNA operates as a complex with proteins. The most abundant are the histones, which form a structure like a spool around which DNA can coil. These histone complexes can switch between an extended, open form, and a closed, compact form. Enzymes that modify the histones control this transition. It is striking that when scientists created genetically modified mice that lacked the histone modifying enzymes, the mice failed memory tests. Mice could no longer be trained to find their way through a maze in a memory task called fear conditioning, they could not remember the experience of a shock to the foot and respond by freezing (going “scared stiff”) when a tone announcing an upcoming shock was sounded. Thus the formation of memory involves modifications of the access to DNA by the by the RNA encoding enzymes that function in gene expression. Because these mechanisms do not actually alter the fundamental order of the DNA bases, they are epigenetic.

Addition of a second type of DNA mark, methylation, represses the activities of genes without altering the base sequence, and can be inherited.  Studies in the lab of David Sweatt at the University of Alabama revealed that the gene encoding the enzyme that adds the methylation marks, DNMT, is turned up during fear conditioning. Also, one gene that impairs a step in memory formation and encodes a phosphate-removing enzyme, PP1, received more methylation marks during fear conditioning. A second gene for a memory-promoting protein factor, BDNF, lost methyl marks.  Memory formation may involve removing the repressive methyl marks from genes that promote memory formation and adding them to genes that limit formation of memories. The epigenetic changes that control the genes for PP1 and BDNF were detected in neurons and thus could not be passed on to future generations.

Epigenetic mechanisms change gene expression much more rapidly than Darwinian mechanisms. But when they operate in somatic cells, cells of the body that do not give rise to future generations, they cannot be inherited. Thus, epigenetic changes in neurons cannot be inherited. Only epigenetic marks in germ cells can be transmitted to offspring. Could our environments cause epigenetic changes in germ cells, so that the change could be passed on to future generations? In at least one circumstance, in utero, during gestation of the embryo, this may occur.

In gene imprinting, epigenetic mechanisms alter the level of expression of the maternal gene copy relative to the expression of the paternally inherited gene. Through imprinting, a parent is able to influence the level of expression of the gene copy that it provides to its offspring separately from the regulation of the same gene from the other parent. Catherine DuLac of Harvard has suggested that imprinting may represent a competition between the two parents. Each parent is struggling to optimize the offspring for its own purposes. The father may through imprinting exert a pressure that leads to greater numbers of offspring, while the mother may use imprinting to exert a pressure that makes the development or nurturing of the embryo compatible with the health of the mother. Imprinting is epigenetic because it imposes heritable changes on gene expression without altering the primary DNA sequence of the gene. A new RNA sequencing method called high throughput transcriptome sequencing suggests that perhaps as many as a thousand genes are imprinted, many involving the nervous system.

What sorts of factors could lead to epigenetic changes transmitted from the environment of the mother to the gene expression program of the offspring and its descendants? One is stress, a second is levels of nutrition, and a third is the health of the mother, for example whether the mother has suffered viral or bacterial infections during gestation. Stress and disease trigger can release powerful hormones that may influence the developing embryo.

A great famine struck parts of German occupied Holland, during the Hongerwinter  (Hunger Winter; 1944-1945) of the Second World War. Children born to malnourished mothers during that famine were subject to many diseases including small body weight. Surprisingly, the second generation of children also suffered from low body weight, suggesting an epigenetic change. 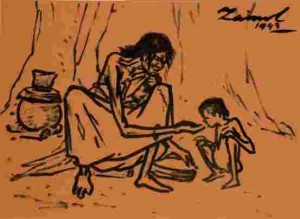 Teresa Reyes at the University of Pennsylvania fed pregnant and lactating mice high fat diets. Offspring from these mice showed an increased preference for sugar and fat. Studies of the DNA of these offspring indicated that epigenetic marks that repress genes that could stimulate sugar and fat intake had been removed.

This notion of epigenetic, heritable reprogramming, which is Lamarckian at heart, suggests a new relationship between environment, mother and developing child. The mother may use epigenetic mechanisms to reprogram the development of the child and its descendants to prepare them for adverse environments. The Central Dogma and Gradualism distorted our view of disease, evolution and even social responsibility by holding such a mechanism impossible. They also have had a large impact on social policy. Epigenetics place a new light on the consequences of the environment for the well being of future generations. Now that we appreciate that hazardous or deleterious environments can have long-term consequences for future generations, such conditions can no longer be tolerated.