A major consequence of HIV infection is the development of cognitive deficits due to the effects of infection on the CNS. These deficits, usually referred to as HAND (HIV Associated Neurocognitive Disorders), are commonly classified in three categories, according to their severity: asymptomatic, mild and dementia. Although highly active anti retroviral therapy (HAART) has significantly improved patient quality of life as well as life expectancy, HIV-associated cognitive deficits, which are present in up to 40% of HIV infected patients  (Cysique, Maruff, & Brew, 2004),  remain a challenging issue. The study of these cognitive deficits is important not only for themselves, but also because they may have a negative impact on the patient’s adherence to treatment (McArthur, 2004).

Regarding HAND, several etiological factors have been identified, particularly, neurotoxic factors produced by infected macrophages, expression of pro-inflammatory cytokines (Merrill, 1992) and the production of the HIV-1 Nef protein by infected astrocytes (Chompre et al., 2012), and others.

Dopamine is a neurotransmitter that belongs to the catecholamine family. Dopamine is produced from the amino acid, tyrosine, which undergoes two changes to yield dopamine. Firstly, a hydroxylation by tyrosine hydroxylase occurs to yield dihydroxyphenylalanine, (DOPA) and afterwards DOPA is converted by decarboxylation by the enzyme dihydroxyphenylalanine decarboxylase (DDC) to yield dopamine. Most dopamine is acquired through food intake (80%) while the rest, a small proportion, comes from the synthesis of phenylalanine in the liver.

Dopamine synthesis occurs in the cytoplasm of the neuron and then dopamine is transported within the secretory vesicles of the neuron for storage and subsequent discharge. This whole process is highly dependent on ATP. Once stored at nerve terminals, dopamine is ready to be released into the synaptic cleft. Upon release into the synaptic cleft, dopamine exerts its function and afterwards, most of it is recaptured by the Dopamine Transporter (DAT), which is located in the presynaptic membrane.

Dopamine in high concentrations in the synaptic cleft may trigger inflammatory and apoptotic processes that cause tissue damage. However the enzyme, monoamine oxidase-B (MAO-B) may degrade dopamine that is not recaptured.

Dopamine receptors are members of the family of G protein coupled receptors. They are divided into two classes: D1 receptors, represented by D1 and D5 receptors that increase cAMP upon binding of dopamine, and D2 receptors represented by D2, D3 and D4, that, on the other hand, inhibit the production of cAMP.

There are 3 main pathways controlled by dopamine: 1.- The pathway of the nigro striatal system, comprising 80% of the dopamine in the brain, projects rostrally from cell bodies in the substantia nigra pars compacta to the richly innervating endings in the caudate nucleus and putamen, two nuclei that, taken together, are called the striatum. 2.- The pathway originating in the ventral tegmental area, which has widely divergent projections innervating many areas of the forebrain, most notably the cerebral cortex, nucleus accumbens and other limbic structures. 3. The tubero infundibular pathway, in which dopamine release occurs directly in the portal system connecting the median eminence to the anterior pituitary and tonically inhibits the release of prolactin by the pituitary lactotrophs. Finally, there is also a very discreet pathway for dopamine release, located on the floor of the fourth ventricle, called area postrema. 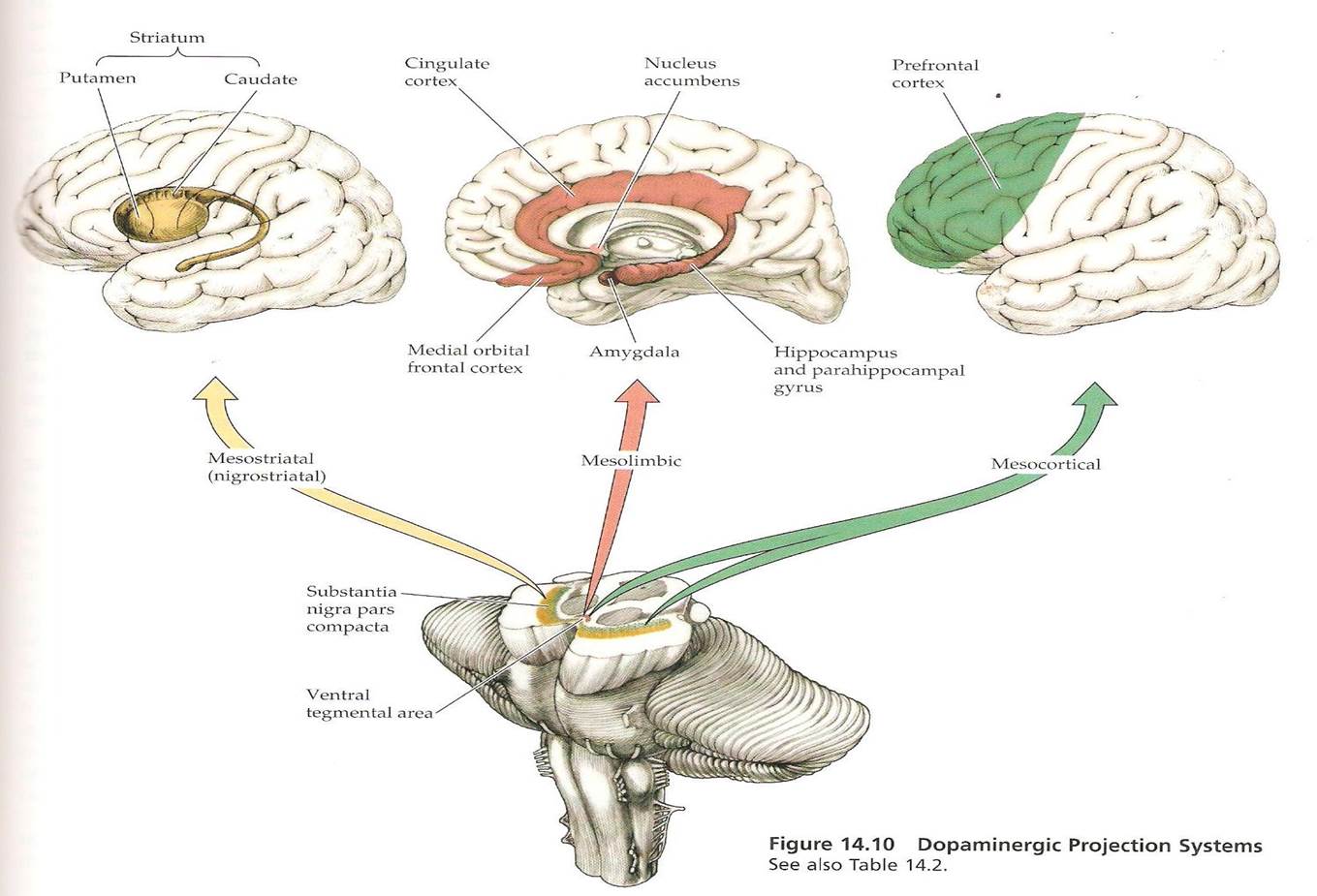 It is well established that HIV primarily affects the basal ganglia, which are  a main efferent for dopamine release (Silvers et al., 2007). Since dopamine is known to play a major role in the regulation of cognitive processes (Nieoullon, 2002), it seems a valid assumption (Levine et al., 2012) that the disruption of its normal rate of production due to lesions of the basal ganglia brought about by the HIV infection of the CNS is a contributing factor to the development of HAND (Kumar et al., 2011; Webb et al. 2010).

According to Chang (2008), “reduced dopaminergic function may contribute to cognitive dysfunction in HIV patients with or without additional cocaine abuse”. When there is, indeed, substance abuse, the severity of HAND may increase (Purohit et al. 2011). Moreover, Gaskill (2009; 2012) states that dopamine is able to modulate macrophage functions because macrophage express dopamine receptors. This becomes particularly relevant given that drug abuse leads to increased dopamine levels, exacerbating the effects of macrophage on the CNS. In addition, recent studies (Midde, Gomez & Zhu, 2012) indicate that the HIV -1 Tat protein affects the dopaminergic tone of infected subjects by inhibiting the DAT and VMAT 2 proteins. Previously, Ferris et al. (2009) had already discovered that the dopamine transporter (DAT) becomes significantly less efficient in the presence of the HIV Tat protein. Zhu et al. (2011) explain this as a consequence a protein-protein interaction between Tat and DAT. Also, according to Ferris et al. (2009) this lower efficiency of DAT could be just the start of Tat-induced loss of nerve terminal function, which would be greatly augmented by the interaction of Tat protein with cocaine. Levine et al. (2013) through  differential expression analysis studies identified genes highly correlated with neurocognitive impairment, among them genes implicated in dopaminergic tone.

Gupta et al. (2011) considered the possibility that DA receptors, especially DRD3, which is expressed in macrophages, mediate the increase of macrophages infected in the presence of methamphetamine and increased dopamine, and concluded that a polymorphism of the DRD3 gene (rs6280TC) modulates its binding affinity. Therefore, inheriting a variant of this polymorphism may increase macrophage susceptibility to HIV infection.

Webb (2009) points out that dopamine is a common link amongst the major factors related to neurocognitive impairments in HIV patients, such as attention deficits, language difficulties and motor dysfunction, although, as Perry (2010) hypothesizes, early dopaminergic synaptic dysfunction would occur before any loss of dopaminergic neurons and therefore could be reversible.

Gelman (2012) found in a post-mortem study that patients with neurocognitive disorders failed to downregulate D2 receptors in the prefrontal cortex. This finding could be relevant to attempts to alter synaptic plasticity pharmacodynamically in HIV infected individuals.

Moran et al. (2013) have tested alterations in the dopaminergic system due to the effects of HIV infection in the CNS in rats.

Since the pathological mechanisms underlying HAND are not completely understood, Jaeger & Nath (2012) advocate the necessity of developing animal models to study these disorders further and to test new therapeutic approaches.

Gorantla et al. (2011) have established five requirements that animal models should, ideally, meet in order to accurately reflect HAND: First, the animals should have virus-susceptible target cells, such as macrophages, that express receptors for viral infection and they also should have cell systems adequate to host the whole viral life-cycle. Secondly, the animals must be infected through known viral portals, such as blood. Third, infection should last long enough to replicate the chronic nature of the disease. Fourth, the Blood Brain Barrier of the model should permit leukocyte transmigration due to the viral infection and, finally, virus target cells and viral reservoirs have to be maintained. Also, it must be considered that HIV is a lentivirus and as such it presents unique molecular and biological properties, including an extended incubation period. Moreover, lentiviruses are species specific, which implies that effects observed in laboratory animals may not occur in the same form in human subjects.

Rodents are used for some HIV infection models, although HIV cannot infect rodent cells. To create suitable models, mice or rats are either modfied transgenically to express viral genes or are modified by transplantion of HIV infected cells into immunodeficient tissues of the animal. The advantage of using rodents, besides their size, is that there are established methodologies for the manipulation of their genomes (see also Jaeger & Nath, 2012). These models have limitations regarding the expression of end-organ disease and, among others, their relatively short life span, which is not adequate to observe the effects of the disease on the CNS. However in recent years a new mouse model has been made with an engrafted human immune system that is more adequate for studying relationships between peripheral infection and neuropathobiology. Also, this engrafted human immune system model is highly specific because in it, brain disease develops only following HIV infection and suppression of the immune system. Moreover, as grafts survive as long as the animal itself, the model allows long term studies of CART. Jaeger & Nath (2012) have proposed an alternate model that would reunite the main characteristics of HAND in a single physiological system, with both a human immune system and human CNS cells, that has the advantage over previous models employing human brain macrophages and astrocytes susceptible of HIV infection. This proposed model also would allow the study of long term effects on the brain of CART therapy, which is suspected to cause neurotoxicity.

In summary, there is substantial evidence for deleterious effects of alterations in the dopaminergic system due to HIV infection on cognitive processes. In this paper, we have considered features that animals models should have to study these consequences of HIV adequately. These considerations emphasize the great potential utility of specific animal models for the study of the impairment of executive function due to HIV infection and the role of dopamine.

One thought on “The role of dopaminergic dysfunction as an etiological factor in HIV-associated cognitive deficits and how it can be tested in animal models-by Francisco Catsarini, Jaume Aran and Marineide Aquino”