Human immunodeficiency virus-1 (HIV-1) neuroinvasion occurs in about 80 % of infected individuals (Persidsky and Poluektova, 2006). In the early stage of infection, HIV enters the central nervous system (CNS) via infected monocytes, macrophages and T cells that cross the blood-brain barrier (BBB) and causes neurocognitive impairment. In the brain, HIV and HIV- infected cells activate microglia and astrocytes, increase chemokine and cytokine production and secret viral proteins, such as HIV envelope glycoprotein gp120 and HIV transactivating protein, Tat. These changes affect the integrity of the BBB and enhance the penetration of infected cells and HIV into the CNS.  Viral proteins can damage neuronal cells and interfere with CNS function (Strazza et al., 2011; Ellis, Calero and Stockin, 2009). 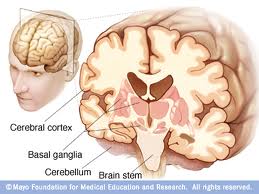 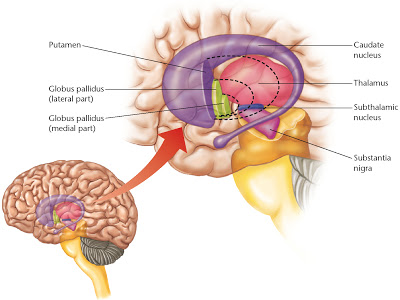 Some patients may develop signs of dopamine deficiency  de novo. Patients are highly susceptible to drugs that act on dopaminergic systems.

This review evaluates the pathogenic role of human immunodeficiency virus (HIV) in the brain damage. We review normal brain functions, mainly of dopamine and glutamate, and how HIV can change these functions through expression of viral proteins, in particular gp120 and Tat. Finally, we discuss how drugs of abuse, like HIV, can target dopaminergic systems related to reward circuits and interact synergistically with HIV.

HOW DOPAMINERGIC AND GLUTAMATERGIC SYSTEM FUNCTION? 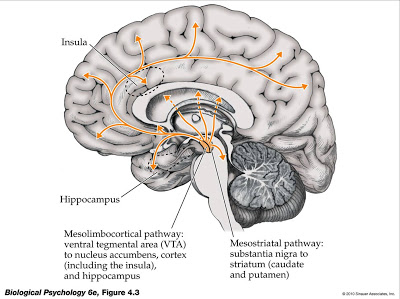 Dopamine is an important neurotransmitter in the brain that regulates mood and affects people’s concentration and motivation. Dopamine acts though dopamine receptors (DRs) that are divided into two subtypes D1- like DRs (D1R and D5R) and D2-like DRs (D2R, D3R and D4R). D1Rs activation leads to the alteration of G protein coupling that results in stimulation of adenylyl cyclase (AC). D2Rs activation leads to a decrease in the enzymatic activity of AC (Gaskill et al, 2009). Dopamine transporters (DAT) are located on presynaptic axonal plasma membrane and are responsible for regulating the concentration of dopamine (DA) in the synapse through DA reuptake (Purohit, Rapaka and Shurtleff, 2011). 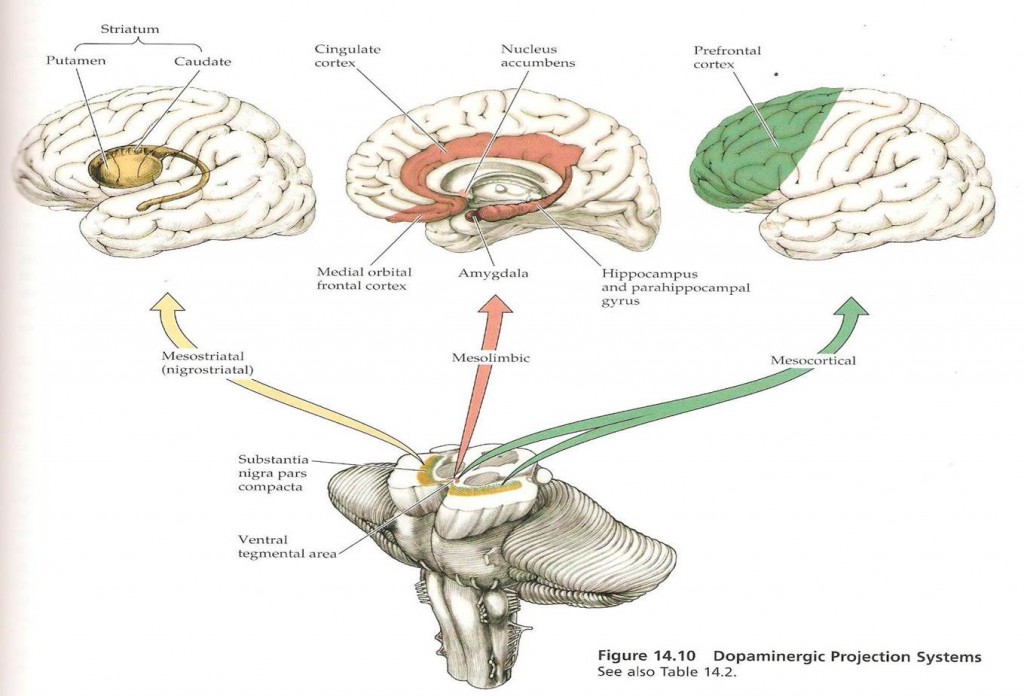 The Brain Reward System (BRS) is a specific limbic circuit that generates feelings pleasure, such as through eating and sex.  This system originates in the ventral tegmental area (VTA) and is connected to a variety of places within the limbic system mainly to nucleus accumbens (NAc) in the basal ganglia and to prefrontal cortex (PFC).  Dopaminergic neurons contribute to the function of the limbic system.  Also, drugs of abuse activate BRS and increase dopamine concentrations in this area. (Lüscher and Malenka, 2011). 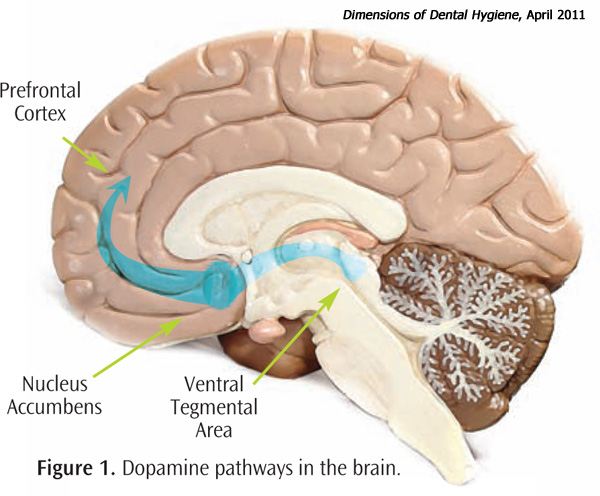 The motivational effects of brain activity are mediated in part by the NAc. The NAc projects to structures involved in behavioural expression. The NAc can be divided into core and shell compartments. The DA innervation of the NAc appears to play an important role in the rewarding effects of drugs of abuse and contributes to addiction.

Theis circuit, which has been extensively implicated for its involvement in the rewarding properties of both natural stimuli (for example, food, drink and sex), and addictive drugs, consists of DA projections from cell bodies in the VTA to limbic structures (mesolimbic pathway, such as the amygdala, ventral pallidum, hippocampus and NAcc) and cortical areas (mesocortical pathway, including the prefrontal cortex (PFC), the orbitofrontal cortex and the anterior cingulate). (Cardinal et al, 2002; Feltenstein and See, 2008; Lüscher and Malenka, 2011)

The PFC is responsible for regulating emotional responses, cognitive control and executive function, with repeated drug exposure leading to cellular adaptations of the prefrontal–NAc glutamatergic pathway that contribute to persistent addictive behaviours. (Feltenstein and See, 2008; Lüscher and Malenka, 2011).

Glutamate is an amino acid and neurotransmitter with important roles in normal cell function and neurotransmission. During synaptic transmission glutamate is released into the extracellular space and glutamate is taken up by astrocytes, via excitatory amino acid transporters, and converted into glutamine. Astrocytes then release glutamine into the extracellular space, which is taken up by neurons and converted back into glutamate (Ernst et al. 2010).

The nucleus accumbens receives converging glutamatergic afferents from limbic regions, such as the amygdala, hippocampus, thalamus, and prefrontal cortex, which are involved in emotional learning, memory and cognition, and project to the basal ganglia, which are involved in somatic motor control. The NAc also receives dopaminergic afferents from the ventral tegmental area. This afferent configuration forms the anatomical basis for the interaction of dopamine with glutamate, which is implicated in the functioning of this structure in the actions of drugs of abuse and mechanisms of learning (Macedo, 2009).

Studies suggest that interactions between dopamine and glutamate do not involve only the stimulation of intracellular signaling cascades activated by these receptors (Nishi et al, 2005). Direct physical protein-protein interactions between dopamine receptors and glutamate also take place. This results in the insertion of new receptors and formation of synapses (Scott L, Aperia A, 2009). 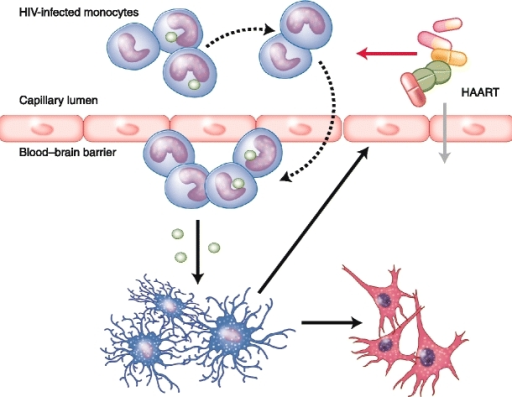 Human immunodeficiency virus type 1 (HIV-1) infects CD4 + lymphocytes and macrophages and the HIV life cycle starts when it infects these cells (Strazza et al., 2011; Ellis et al. ,2009; Yao et al, 2010). On the surface of the viral envelope, two sets of proteins, gp120 and gp41, attach to CD4 and CCR5/CXCR4; this allows HIV to enter host cells. Then, HIV integrates the cell’s DNA and uses the host cell to manufacture copies of itself through the action of viral enzymes like reverse transcriptase, integrase, protease and through structural proteins. HIV generally causes progressive immune system destruction, as shown by evidenced by the reduced numbers of CD4+ and CD8+ T cells. The result is acquired immune deficiency syndrome (AIDS), whose victims are characterized by susceptibility to opportunistic infections (Ellis et al., 2009; Yao et al, 2010). 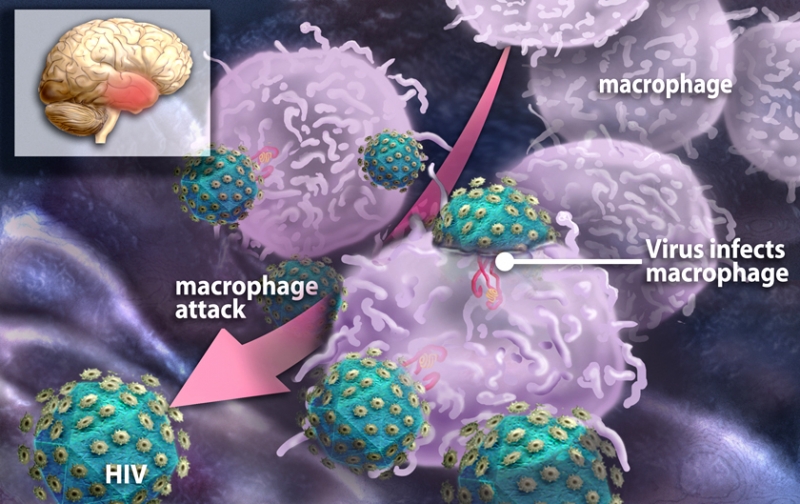 The HIV-associated cognitive disorders (HAND) and their pathological origins depend on entry of the virus into the CNS via immune activated leukocytes from the periphery, especially macrophages and monocytes. HIV-1 enters into the brain during the early stage of infection via infected immune cells, a strategy known as the “Trojan Horse” strategy,  and then causes changes in the brain environment, leading to brain injury (Gras et Kaul, 2010)

Macrophage play an essential role in HIV-induced neuropathogenesis. Macrophage carry the virus into the brain where nerve cells come into contact with HIV and their neurotoxic proteins, directly causing damage. Furthermore, HIV triggers the activation of resident cells of the brain tissue, causing these cells also to produce toxic substances , which is called the indirect pathway of neuronal injury (Scorziello et al, 1998; Ferris et al., 2008). Many of these toxic substances, such as TNF-alpha, influence the cells of the blood brain barrier (BBB), increasing the expression of endothelial adhesion molecules, such as monocyte chemotactic proteins (MCP-1) (Ferris et al., 2008; Sharma et Bhattacharya, 2009) and VCAM-1 (Gras et Kaul, 2010), which in turn increase the entry of infected macrophages and monocytes into the brain. Macrophage also produce numerous factors that are neurotoxic and contribute to neurological damage (Scorziello et al. 1998; Sharma et Bhattacharya, 2009).

Viral proteins, such as gp120 and Tat, impair dopamine transporter (DAT) functions, which increases the levels of dopamine at the synapses in the early asymptomatic stage of HIV infection and both of these preteins can cause dopamine neuron cell death via apoptosis (Nath et al., 2000; Nath, 2010). Increased cell death of dopaminergic neurons leads to a dopamine decrease that may exacerbate the severity of HAND/HAD.

As will be seen below, many of the toxic effects of Tat and gp-120 are related to NMDA receptors (NMDAR), to the neurotransmitter glutamate and the dopamine system.

HOW DOES HIV ALTERS GLUTAMATE AND DOPAMINERGIC SYSTEMS?

Neurotoxic viral proteins released from HIV-infected cells are believed to play a major role in the pathogenesis of the HIV. These proteins alter dopamine and glutamate systems, mainly by changing the expression of NMDA receptors and NMDAR function and by impairing dopamine transporter function, leading to dysfunctions in neurotransmission between neurons and ultimately neuronal death.

Tat uptake by uninfected cells results in activation of NMDARs in neurons and in expression of apoptotic proteins (King et al, 2006). Interactions between NMDARs and Tat mediate apoptotic cascades, Ca2+ imbalance and excitotoxicity (Ferri et al, 2008). Tat-treated neurons develop a generalized Ca2+ dysregulation, resulting in the release of Ca2+ from IP3 regulated intracellular stores. Ca2+ flux through the NMDAR activates nNOS leading to NO production and neuronal apoptosis. Pyk2, a tyrosine kinase involved in a protein complex triggered by binding of Tat to neurons, may play a role in cross activation between the NMDAR and G-protein coupled metabotropic glutamate receptors (mGluR). The NMDAR shows augmented sensitivity to glutamate, which in combination with increased extracellular glutamate concentrations, results in glutamate excitotoxicity (King et al, 2006).

Extreme stimulation of NMDARs is related to lethal effects on neurons and can be triggered by gp120 and Tat. Both gp-120 and Tat enhance intracellular Ca2+ concentrations, which activates signaling pathways for neuron apoptosis.

The ability of astrocytes to transport glutamate is reduced by exposure to HIV-1 or gp-120, leading to incomplete recycling of glutamate (Ernst et al, 2010). 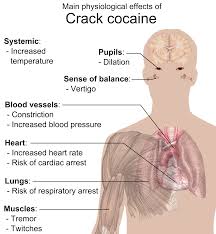 Several results suggest that activation of VTA dopamine neurons alone is sufficient to cause a form of synaptic plasticity evoked by drugs when combined with spontaneous activity (Lüscher and Malenka, 2011). An additional requirement for the induction of synaptic plasticity evoked by drugs is the activation of NMDARs in DA neurons because of NMDAR blockade prevented the formation of plasticity (Lüscher and Malenka, 2011).

Glutamatergic afferents and glutamate receptors such as NMDARs are densely distributed in the reward circuitry. Exposure to drugs leads to plastic alterations in the NMDAR. This change is essential for persistent changes that explain the addictive properties of stimulants. The NMDAR is a neuroimmune-sensitive target of HIV and a critical receptor that mediates the action of drugs (Buch et al. 2011).

Addiction can be defined as drug-induced changes in the central nervous system (CNS) that produce maladaptive alterations in spontaneous behavior and in the behavioral response to readministration of that drug.  The drug-induced changes in the structure and function of the circuit consisting of interconnections among limbic cortex, basal ganglia, and brain stem nuclei are progressive, and to some extent parallel the development of the behavioral characteristics of addiction. A number of molecular neuroplastic alterations have been identified in the brain after repeated drug administration, and some of these appear to be important in the development and/or expression of addictive behaviors.  The neuroadaptations associated with use of a drug of abuse are not entirely predicated on the pharmacology of the drug because the environmental regulation of the drug-induced changes is a critical factor in the development and expression of addiction (Feltenstein and See, 2008, Kalivas, 2002).

Cocaine is a nonselective inhibitor of reuptake of dopamine and acts through inhibition of dopamine transporters (Lüscher et Malenka, 2011; Nath et al, 2000). This inhibition triggers a fast increase of extracellular neurotransmitters in the synaptic cleft, which is responsible for accelerating the loss of the dopaminergic system in compromised patients with HIV infection (Gaskill et al, 2009). Moreover, when neuronal cells infected with HIV were exposed to cocaine, they show neuronal cell death and oxidative stress (Nath et al, 2000).

It was also shown that cocaine can enhance the replication of HIV virus in macrophage and monocytes induced by IL-10 and, together with the viral proteins, can increase the activation of glial cells, oxidative stress, neurotoxicity and collapse of the BBB. Cocaine also increases the replication of HIV in astrocytes (Nath, 2010).

Methamphetamine (METH) is a central nervous system stimulant drug. METH raises extracellular dopamine levels by inducing stimulation-independent DA efﬂux via reverse transport through the DA transporter and by inhibiting dopamine re-uptake. Also, METH can impair the function of intrcellular vesicular dopamine transporter. Like Tat and gp120, drugs of abuse, such as metamphetamine, target the dopaminergic system. METH enhances the release of glutamate that can contribute to the neurotoxicity of this drug. METH can also lead to damage, which involves oxidative stress, excitotoxic mechanisms, neuroinflammation, the ubiquitin proteasome system, mitochondrial and neurotrophic factor dysfunction, all in the CNS (Yamamoto et al, 2010; Purohit et al, 2011; Schmitz et al, 2001)

Feltenstein MW and See RE. The neurocircuitry of addiction: an overview. British Journal of Pharmacology (2008) 154, 261–274

Greger I. H, Ziff, E. B, and Penn A. C. Molecular determinants of AMPA receptor subunit assembly. Neurosciences Vol.30 No.8. 2007